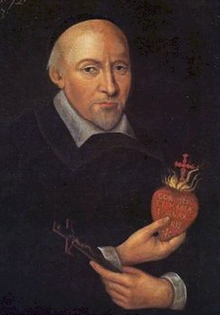 St. John Eudes was a French missionary and the founder of the Congregation of Our Lady of Charity, and was also the author of the liturgical worship of the Sacred Hearts of Jesus and Mary.

St. John was born at Ri, France on November 14th, 1601.  At the age of fourteen he took a vow of chastity and since the time he was a child he tried to live in imitation of the Lord Jesus. When he was ordained a priest in 1625, at the age of 24, he was immmediately thrust into the service of victims of the plague, whom he cared for at great risk to his own life. He also began preaching missions and was known as the greatest preacher of his age, preaching missions all over France, especially throughout Normandy.

In 1641 he founded the Congregation of Our Lady of Charity of the Refuge, to provide a refuge for prostitutes.  In 1643 he founded the Society of Jesus and Mary for the education of priests and for missionary work.

Special Thanks to the Catholic News Agency for supplying the information on this saint.